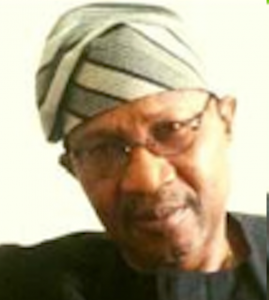 Educated at the Universities of Ibadan and Pennsylvania, he was a U.I. Rockefeller Foundation Scholar at Penn and an awardee of the Fulbright Senior African Research Fellowship in his rst decade of teaching at Ahmadu Bello University, Zaria. Acknowledged as the rst Professor of Criminology in Nigeria, the thrust of his academic and professional career have covered teaching, research/publications, policy advice, and public-enlightenment in the areas of sociology of law, crime prevention and control, policing and law enforcement, courts and justice administration, security, governance/corruption, all in the context of socio-economic and political development.

His many publications include two edited pioneering volumes on corruption in Nigeria: Nigeria: Corruption in Development (1983, Ibadan University Press); and Fighting Corruption and Organized Crime in Nigeria Challenges for the New Millennium (2001, Spectrum Books).

He had served as the rst Director of the United Nations African Institute for Prevention of Crime and Treatment of Offenders (1990- 92) and was Chief Project Consultant on the Corruption Money Laundering Nexus in West Africa Survey for ECOWAS Inter- Governmental Action Task Force Against Money Laundering and Terrorist Financing in West Africa (2009-2010). Currently, he is a Member, Presidential Advisory Committee Against Corruption (PACAC).

President Muhammadu Buhari, GCFR, as part of government's anti- corruption ght, constituted the Presidential Advisory Committee Against Corruption (PACAC) in August 2015. It was the very rst committee he set up after he was sworn into of ce on May 29th 2015.

PACAC commenced work on August 10, 2015 with the mandate to, inter alia - promote the reform agenda of the government on the anti-corruption effort, to advise the present administration in the prosecution of the war against corruption and the implementation of required reforms in Nigeria's criminal justice system. A 7- member Technical Committee supports the PACAC.